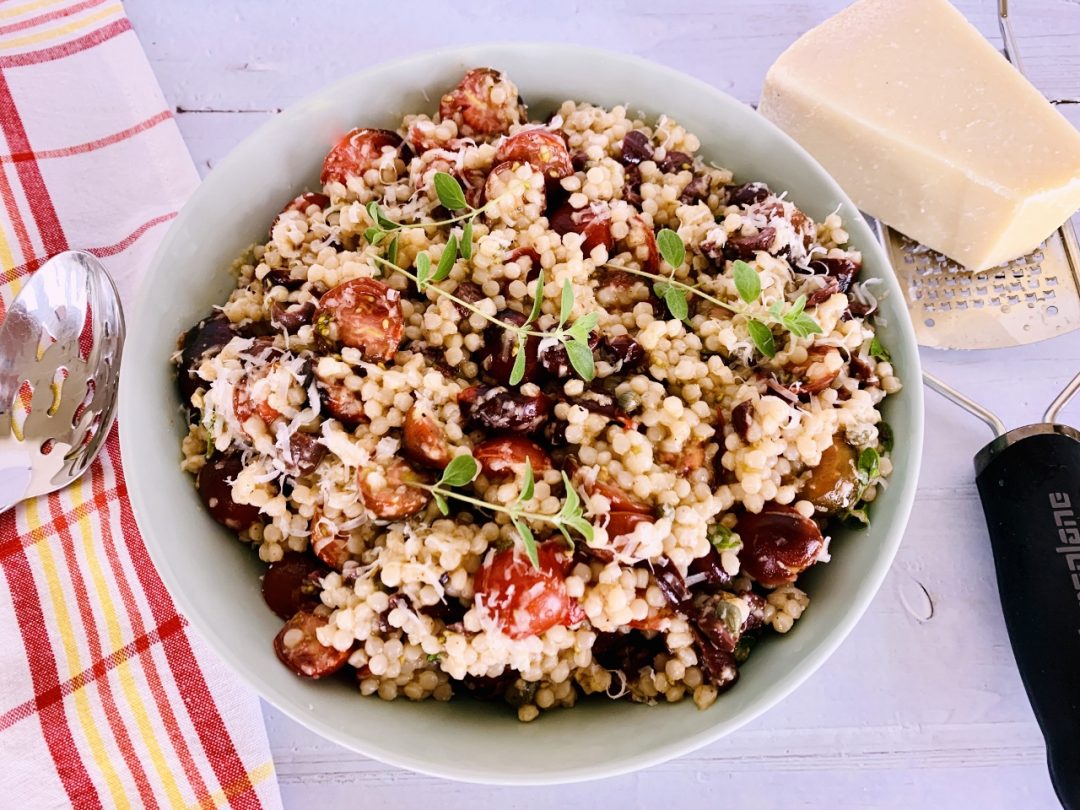 I’m not one to brag, but I have the best cherry tomato plant on planet earth this summer!  Tomatoes are a summertime staple in most households, and many of us grow our own tomatoes during the warmer months of the year.  However, living by the coast doesn’t always produce the best tomatoes because it’s damp, and not consistently hot enough to grow great red ripe tomatoes.  But, somehow this little plant of mine survived the not-so-chilly winter, and seeded itself in the perfect location, on a trellis next to my jasmine, and wanted to compete for the climb up to my deck.  This tomato plant stands 10-feet high, yes you heard it right, and gives me bucks of dark cherry tomatoes and I couldn’t be more pleased.  What’s even better is that I didn’t even plant it there, it was a seed that flew all by itself, and decided it was going to survive.  Now how’s that for a tomato story.

The question now is, what I’m I going to do with all these terrific tomatoes?  Not a problem.  Last night, I was grilling chicken (recipe coming this week), and I decided to whip up some Israeli couscous to serve alongside my chicken.  Don’t ask me why, but I just love these chewy semolina pearls, and their smallish size that allow you to add flavorful ingredients like tomatoes to them.  So, after I boiled some couscous and drained it, I dumped it in a bowl with a bit of olive oil and minced garlic, and tossed it up.  The aroma was magnificent and I couldn’t help up shovel a little in my mouth for tasting.

I then dumped in my freshly sliced tomatoes, along with some chopped Kalamata olives, and capers and added a few more glugs of olive oil, and folded it into itself.  It was really tasty at this point, but it needed a little bit more flavor, so I went for the Pecorino cheese and shredded a bit over top.  My oregano growing on the deck was calling to me, so I grabbed my scissors, and chopped off a few sprigs and added the leaves to the bowl.  After a pinch of salt and a few big grinds of black pepper, it was set.  This salad is more than delightful served as a side dish, or as an entrée, because I could eat the whole bowl,  but mostly it’s so darn good.  It’s simple flavors, which include good tomatoes, are something quite nice at mealtime. 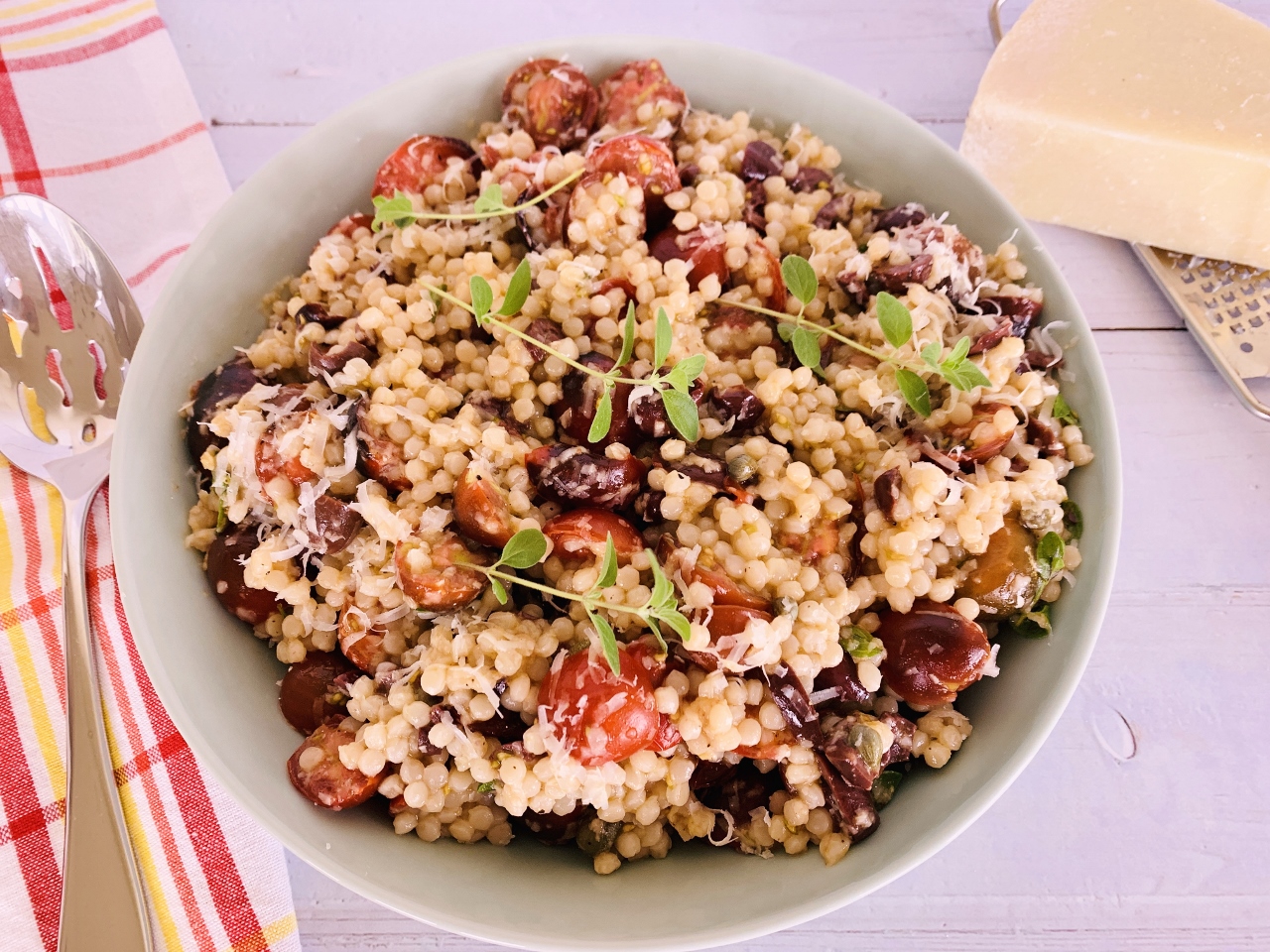 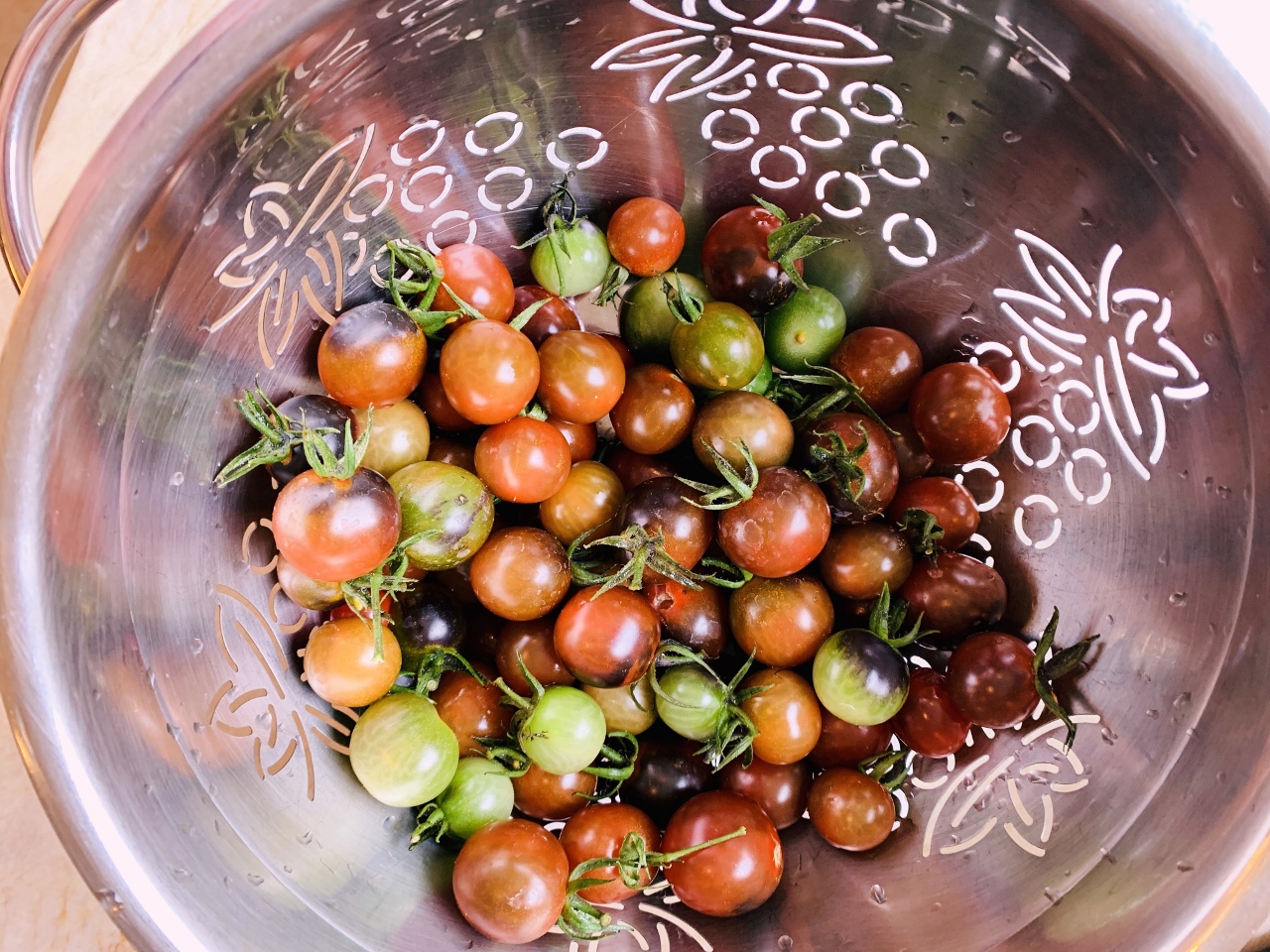 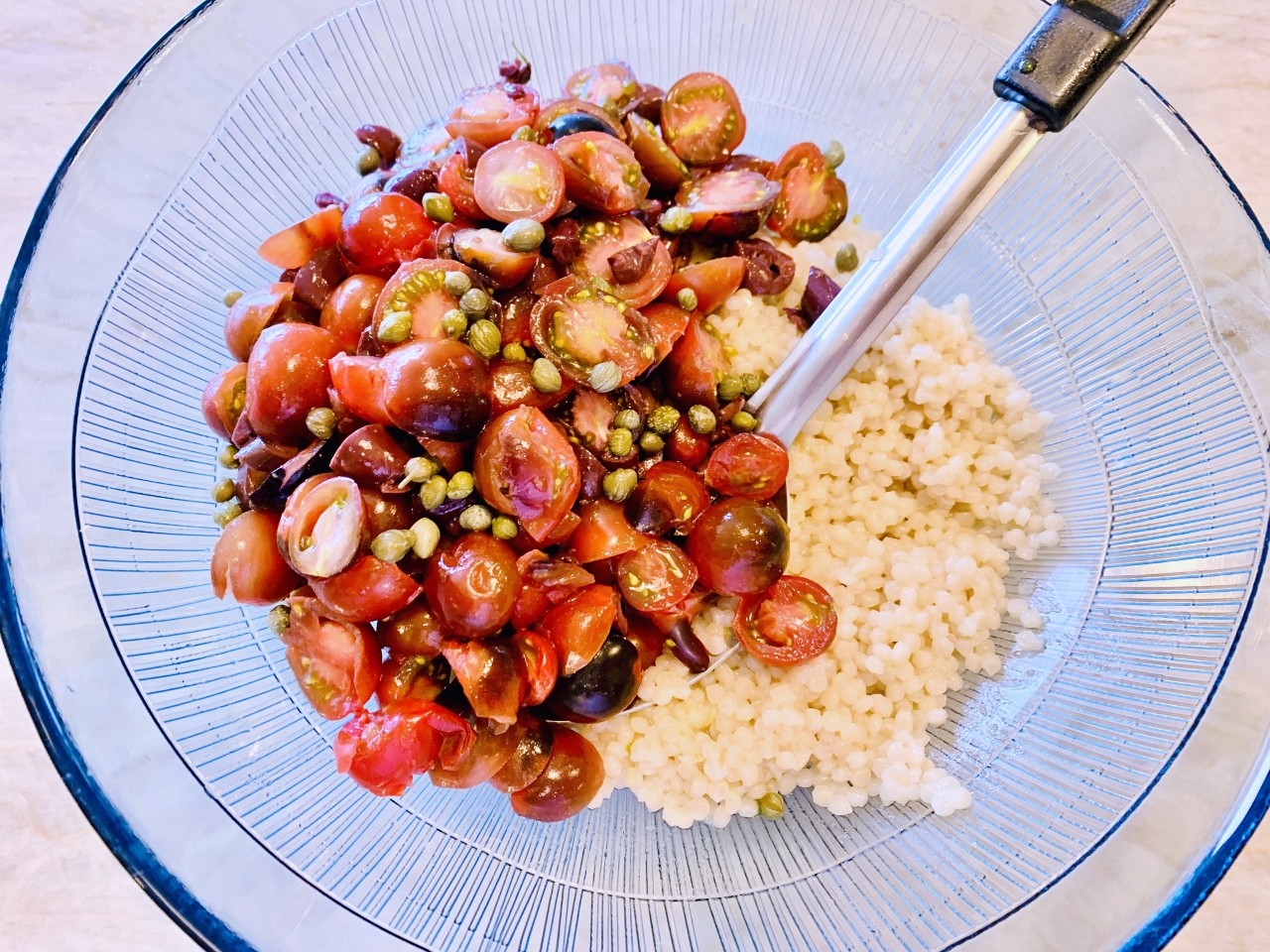 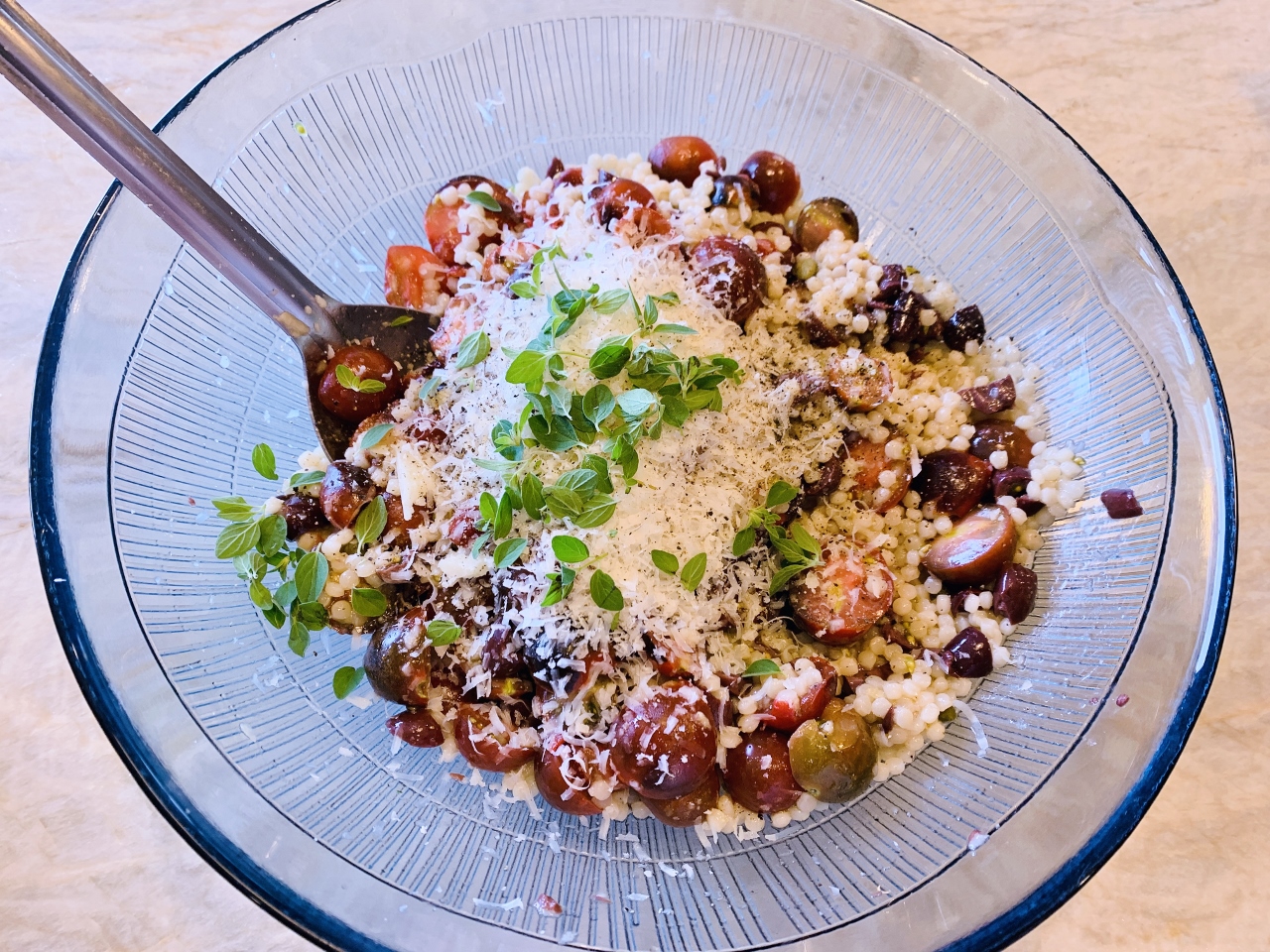 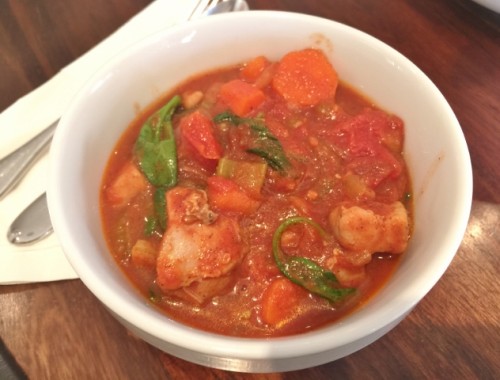 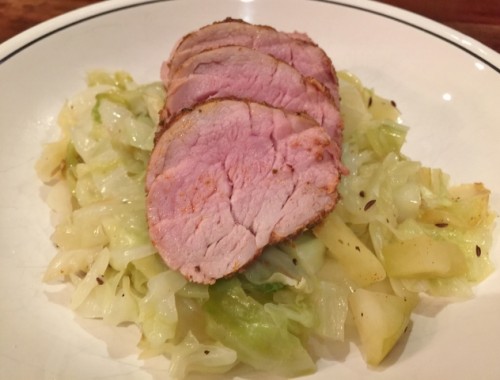 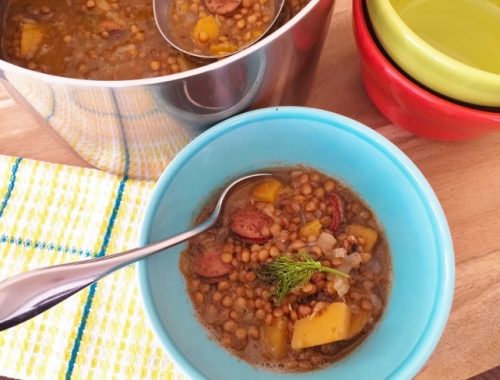