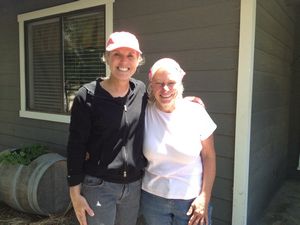 I had the great privledge last weekend to be invited to make goat cheese at Bev Michels farm, Alcea Rosea in Templeton, CA.  It has been a dream of mine since I became a chef and food consultant to learn how to make cheese and especially goat cheese from an authentic farm like Alcea Rosea.  Alcea Rosea means Hollyhock in Latin and that is the name of the street where Bev’s farm is located. 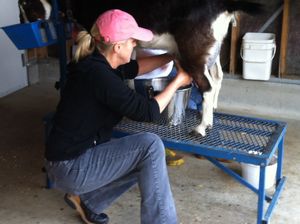 So, I packed up the car with rainboots and hiking boots and clothes to milk goats in and headed to Templeton with my husband.  We stayed at a bed and breakfast close by called Carriage Vineyards.  Needless to say, I didn’t get much sleep anticipating the next day’s events and the fact that the bed was a little soft for me but, we made the best of it. 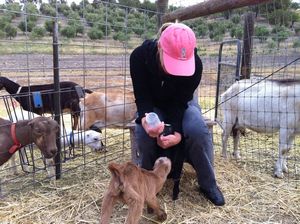 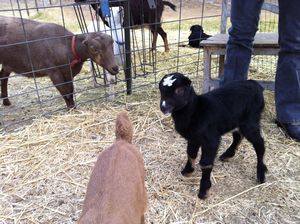 Bright and early with a 7 a.m. arrival, Bev greeted me and my husband just as she was finishing up milking a few goats before I got there.  The farm was very charming with eight female goats to milk, three babies to hand feed as well as water and feed the male goat.  Goat number three (whom I can’t remember it’s name) was the goat I tried my hand at milking.  I did okay with a firm grip but I found the right side not producing for me like the left side.  After several minutes of working at it, Bev offered to take over and Wow, what a difference.  She can milk goats with vigor!  I was very impressed with her speed and the flow of frothy warm milk going into the pail. 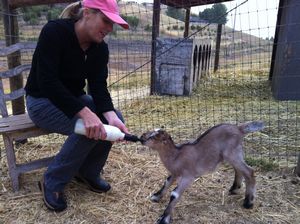 Next, we were off to fed the baby goats by bottle but needed to slightly warm the milk on the stove to body temperature.  After Bev filled the bottles, it was time to meet the two day old babies.  Okay, now this is where I really fell in love with the sweetest little black and white goat I had ever seen or fed for that matter.  He was like a puppy in my hands, gentle and soft.  I struggled a little at first to gently put the nipple of the bottle in his mouth to try to get him to suck.  But then, after I pushed his tongue back in his mouth a few times he got in the groove and put down that bottle in no time.  I can’t imagine doing anything better.  My husband tried to feed the babies a few times but found himself being nudged by the four day old goat several times for attention.  What an experience. 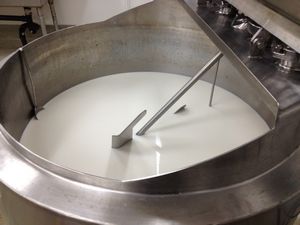 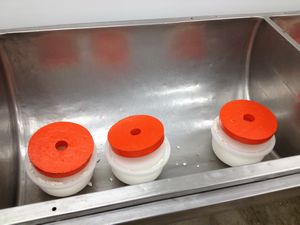 After Bev milked five more goats, we said goodbye to my husband and got serious about cheese making.  Next, we changed into our rainboots for sanitary purposes and headed into the cheese making room that Bev had just built and approved by the health department.  First, we dumped sixteen gallons of fresh goats milk into the pasturization machine.  We warmed it to 80ish degrees and then added renant and culture to the milk.  After one hour we cut the cheese into fine squares and took out 1/3 of the whey and replaced it with water.  This was called washed curd cheese.  Next, we heated up the curds to 100 degrees and gently shook them through our fingers until it looked like stringy mozzarella.  We placed the curds into six molds and placed weights on top for an hour. 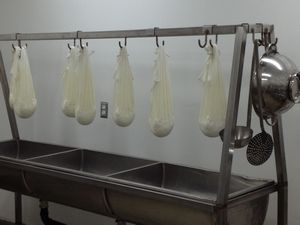 In between making the Merriment cheese, I had the opportunity to form the Templeton Gap cheese, which is an aged goat cheese that was hanging in cloth over the large metal bin inside the cheese room — Bev had made it the previous day.  So I weighed and formed the cheese into balls and placed them inside the aging room.  It reminded of making bread, very therapeutic.  The aging room was 56 degrees with 90 percent humidity and Bev ages the Templeton Gap from three to six weeks. 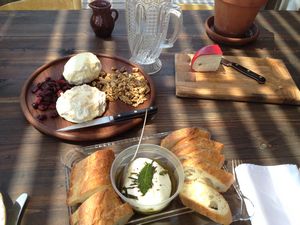 After cleanup and flipping the cheeses in the aging room and the refrigerator, we headed in the house for a cheese and salumi lunch.  The Templeton Gap was the best aged goat cheese I have put in my mouth.  The five week aged goat cheese was my favorite but I must admit the three week was fresh and flavorful as well.  Her fresh chevre with herbs and olive oil is a best seller and a nice cheese to take to a party or picnic.  The Merriment reminded me of a cross between Gouda and Parmesan, nicely flavored with a slight crystalization in the center of the cheese. 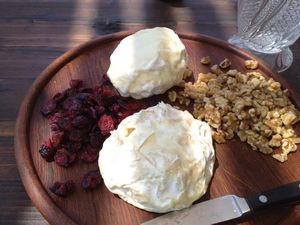 It was a day to remember and I am greatful to Bev for such an experience.  If you are ever in Templeton or Paso Robles pick up some of Alcea Rosea Farm’s cheese, it is truly delicious.  I see cheese in my future! 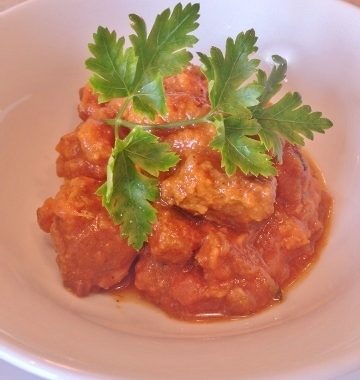 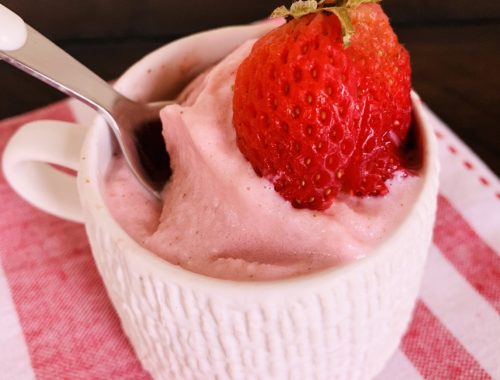 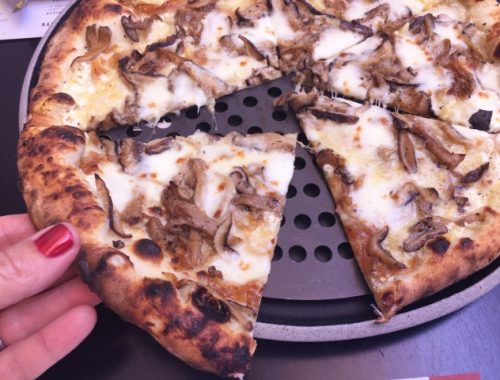