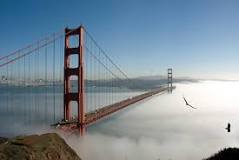 San Francisco in the summer is cold, crowded and a food lover’s paradise.  I have forgotten how busy the city is during June, July and August since we moved away several years ago but, there is one thing that keeps drawing me back and that is the delicious selection of bars and restaurants. 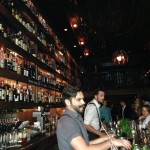 On a recent trip, we began our quest at a local whiskey bar called Rickhouse that was located right off Kearny and Market Streets.  The bar was dimly lit with a large front window and patrons shoulder to shoulder sipping on a favorite whiskey cocktail.  The bartender had a mustache that was curled up at the ends and it made me smile because I hadn’t seen one quite like that in so many years.  I ordered my favorite cocktail – The Manhattan – which was poured in a small old fashioned champagne glass with an amarena cherry dropped inside.  My husband ordered a cocktail from the list which included blends of fresh juices and whiskey of course.  The drinks were both delightful and we sipped them slowly while people watching. 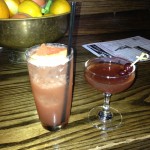 On to dinner with friends at SPQR.  I had read about SPQR for several years and I have always wanted to try it so, here was my chance.  The menu was very large and required a few questions answered from the waiter.  Some favorites were the Corn Soup with a dollop of lime crema and the Fritto Misto which was not only tempura fish but, eggplant, summer squash and fiorelli which are flower buds that eventually grow into squash blossoms.  I found both dishes the best of the evening but, the calabrian chili sauce that was on the side of the Fritto Misto was the most unique spicy treat with pureed puffed corn crunchies on top. 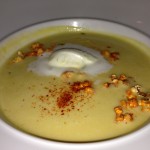 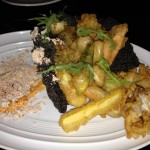 As for pasta, we had the chance to try many because we were out with our friends but, the two that were the best were the Cocoa Bucatini with Fonduta and Truffle Pecorino.  I am not a huge fan of sweet pasta but, the cocoa in this dish was savory and added a whole other level of flavor decadence.  The cheese fonduta was creamy and rich and paired so nicely with the earthy pasta. 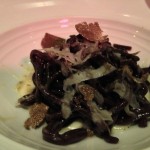 The White Corn Ravioli with Alba mushrooms, huitlacoche butter and smoked goat cheese was another decadent treat.  The pasta was coated in this corn fungus butter and filled with corn and goat cheese.  Some dishes fell short – the squid ink chittara which was a little dry and the mushroom torchio with chard and espresso cheese which tasted bland. 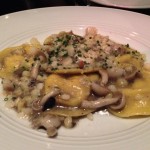 As for dessert, the Spiced Bombolini with milk caramel was crazy great.  The little puffy donuts with brown butter gelato were delicate and to die for delicious.  The white chocolate budine di pane tasted liked a mini french toast and it was pretty good as well. 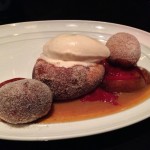 The next day we toured around the city and cruised through the ferry building until we headed to lunch at Hard Water.  I found this place listed on Eater SF and wasn’t sure if I would enjoy it.  Hard Water is right off of the Embarcadero a few piers down from the Ferry Building and the menu read like Southerners crashed Northern Cal. 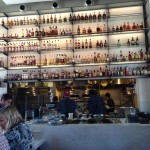 The Pork Cracklins caught my eye because I am a huge pork fan.  These beauties were not your average cracklins – pork belly cubed up and fried, then tossed in a dry spice rub. These little porkies were chewy, crunchy and hot all at once, lovely!  After the pork I needed something a little lighter so, oysters on the half shell with a butter lettuce, grapefruit and bacon salad were refreshingly nice. Maybe not too light? 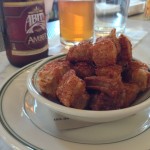 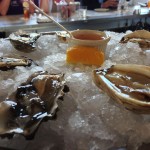 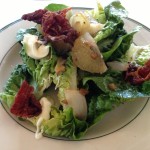 My husband opted for the Fried Chicken Sando.  This particular sandwich had not only moist and crunchy fried chicken but, mortadella, provolone and pickled peppers with a creamy spread on a sesame seed bun.  The best one yet! 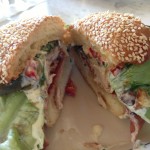 After a day of waiting for the cable car and stopping in the Buena Vista for an Irish Coffee we met some friends for dinner at Aziza.  I had read about this place on a few blogs and was interested in trying the upscale Mediterranean cuisine. 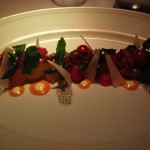 We each had two courses followed by a shared dessert and it was the perfect amount of food considering our trip.  I started with the Tomato and Melon Salad with harissa and aged goat cheese.  It was beautiful to look at as well as eat.  Delicate and delicious were the tomato and melon with just a small hint of spice from the harissa.  This salad was so wonderful and the picture doesn’t give it justice.  My husband had the chicken wings of all things, that were deboned and served elegantly with nigella seeds, cashews and a yogurt sauce.  Not your typical wings. 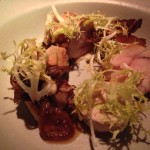 For entrees, I had the Cornish Hen with potato, maitake mushrooms and frisee.  The hen was boneless and served in a roulade style.  The flavors on the hen were comforting and not too heavy, I enjoyed it.  Duck with artichoke, date and apple was my husband’s entree and he loved the combination of sweet and savory. 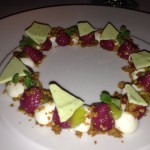 As for dessert, Black Currant Curd with vanilla cream, almond sable cookie and pieces of fennel meringue was presented in a colorful ring and tasted as good as it looked.  Aziza is creating some very wonderful food with spectacular flavors and freshness.

San Francisco is still one of the best dining places in the country and even though the summer is a little cold and windy, the food is always amazing. 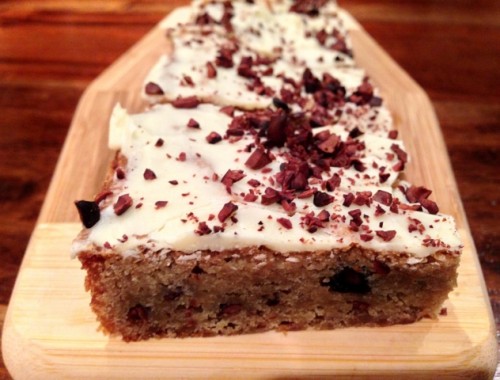 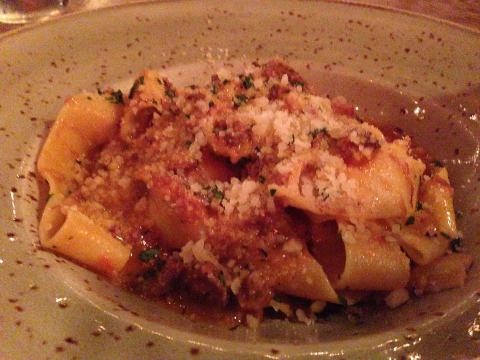 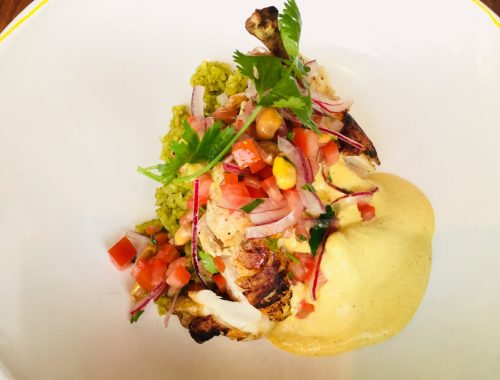