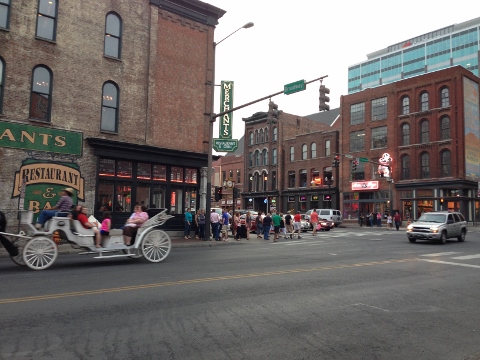 Nashville is one of my favorite places to visit because of the country music, the people and of course the restaurants.  Nashville is starting to remind of a Southern Portland Oregon where young chefs are popping up all over the place with rustic style eateries.  The food is focused on farm-to-table, but the cuisine has more of a Southern Flair as you would expect.

The neighborhoods that surround the downtown are where the latest restaurants are located.  And you definitely need a car to travel to most of them because they are a few miles away from the center of downtown.

Our first night we had the opportunity to dine at Etch which is located just across the parking lot from the Music Hall of Fame.  The space is quite large and the open kitchen design makes it fun to watch the chefs at work.  Chef Deb Paquette is at the helm and her food is very impressive.

For starters, the Roasted Cauliflower appetizer sounded pretty simple however, Chef Paquette’s version was exceptional.  Her three sauces paired with the dish were the show stopper.  The Smoked Truffle Pea Pesto was delicately done with an earthiness that is hard to duplicate.  The Feta Crema with small pieces of cauliflower whipped into it was divinely creamy and perfectly salty. The Romesco sauce, or red pepper coulis had a smokiness to it too and I just loved it. 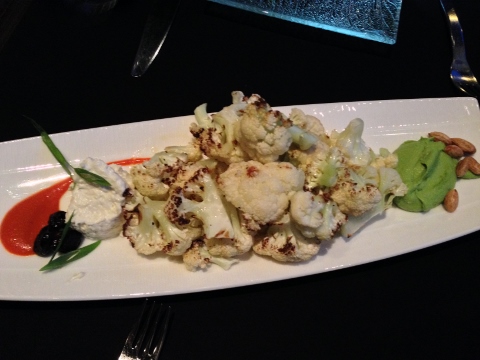 As for salads, Etch had a few that looked enticing, but the Charcuterie Salad with prosciutto, house cured sausages and smoked lima beans was the winner.  The greens were tangy from the spiced vinaigrette and the pickled onions, but the fried mushroom on top was an added crunchy bonus. 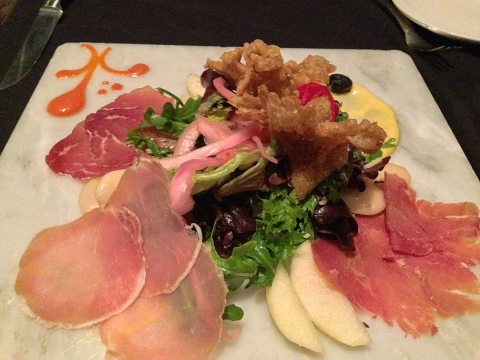 For an entree, the Sous Vide Filet of Beef was moist, tender and still pink on the inside with a nice crust on the outside.  The creamy whipped potatoes and shaved asparagus were a nice accompaniment, but the dollop of Duck Butter, awesome. 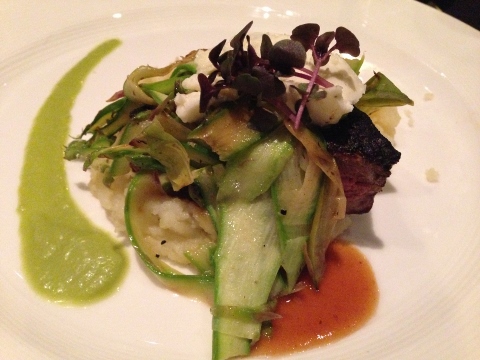 Our second dinner was at Rolf & Daughters, just a few miles north in Germantown.  The cuisine has been winning several praises and I wanted to taste it for myself.  Our first starter was quite a surprise because it was minuscule. The grilled scallions with egg yolk droplets and bread crumbs was ridiculously average at best, there wasn’t enough on the plate to taste. The waitress described it more as a dip??? 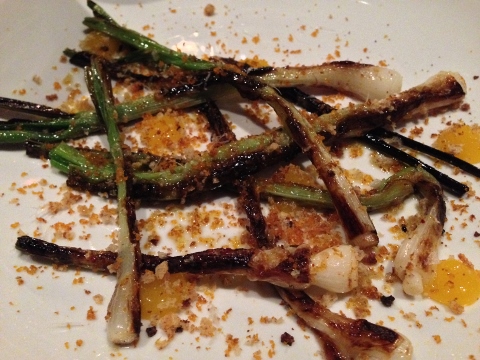 The next appetizer of Dry Aged Beef Tartare on Toasted Country Bread in a pool of Salsa Verde was much nicer. The chopped pieces of beef melted in your mouth.  My only advise is to add a little heat in the green juice or salsa verde. 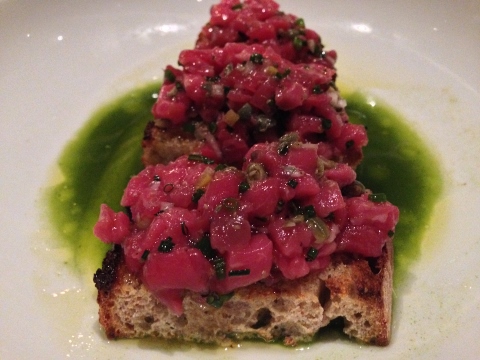 Chef Krajeck really made up for the first appetizer with his version of Squid Ink Canestri with Shrimp, Squid and Pancetta.  This dish was my favorite of the entire trip and probably the best squid pasta dish I have ever eaten. The housemade large macaroni style noodles were magical with a nice taste of the sea. As for the sauce, amazing – pan sauce with pieces of chopped shrimp and pancetta with a hint of lemon. 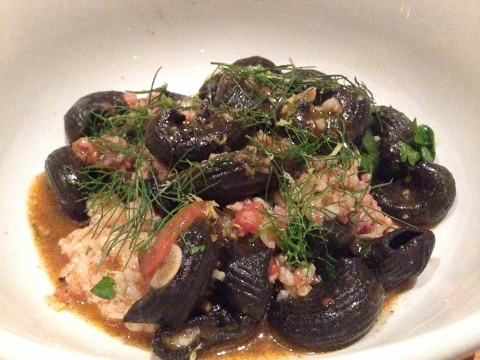 The Dry aged Beef Meatballs in a Sunday Sauce with Sauteed Greens were moist and tender.  The meat tasted extremely fresh and the moistness was not from too many bread crumbs. 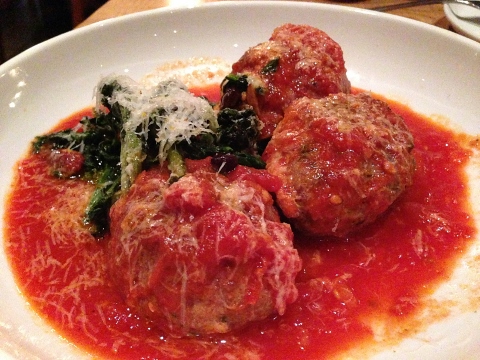 Our third meal in Nashville was a place I had read about that sounded similar to Rolf & Daughters, but that was not the case.  Lockeland Table, owned and operated by Chef Hal M. Holden-Bache, is creating his own farm-to-table concept including a wood burning pizza oven. 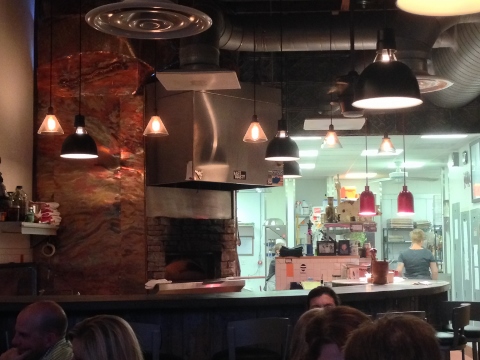 We started with a housemade Gin Manhattan which was aged in a Bourbon Barrel which made the drink pink. It was flavored so gently and tasted deliciously smooth. 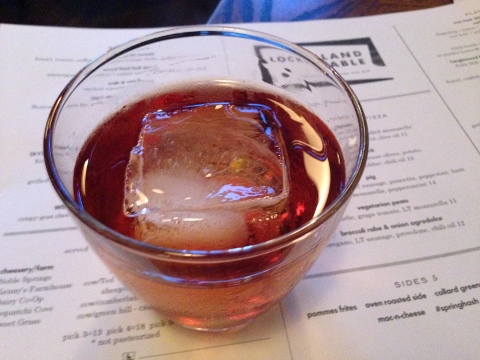 We definitely had to try Chef Holden-Bache’s pizza because of the unique combinations he was creating.  The Woodstock – Ham, Castlevatrano Olives, Oregano, Cheddar Cheese and Potato – was delicious.  I have had my share of potato pizzas before and for the most part I don’t really care for them, but this pie was fantastic.  The potatoes were sliced with the skins on and then par-cooked so that when cooked again in the wood oven they were moist and creamy.  So Good! 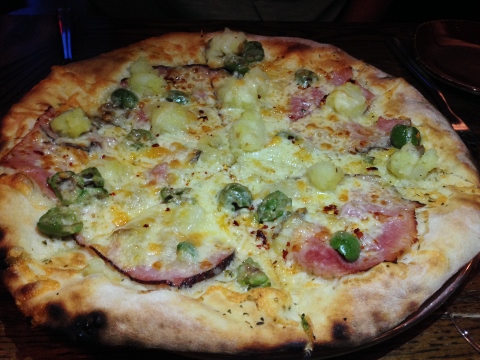 The Iron Fork 2014 winning dish which was Rack of Lamb was exceptional. The meat was perfectly roasted and served with sauteed kale, fresh kale, herb puree, fingerling potatoes, grapes and fresh feta cheese all tossed together.  The veggies made this dish complete and it definitely tasted like spring. 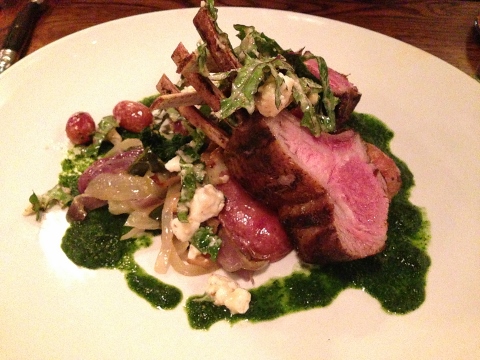 Our last night after the Grand Ole’ Opry we headed to Husk in Nashville. The building is beautiful and reminds you of their space in Charleston.  The old bricks and large whispie trees in front give it a Southern Charm like none other. 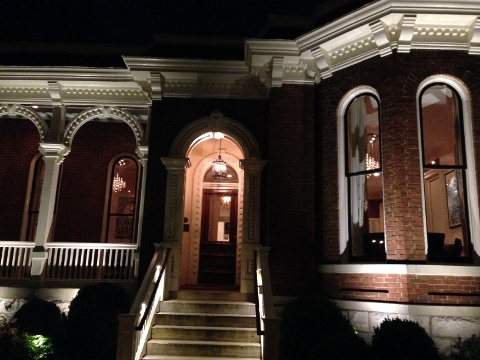 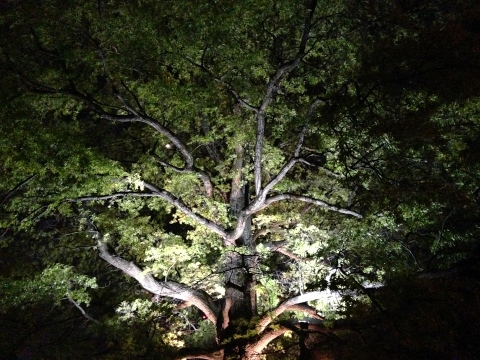 As for the food – Chef Sean Brock has beautifully duplicated his cuisine in Nashville.  For starters, the Shrimp & Grits are not your traditional heavy creamed mash, but delicately stirred and sitting in a broth topped with Sweet Shrimp.  There was a nice creamy texture to this dish without all the heaviness. 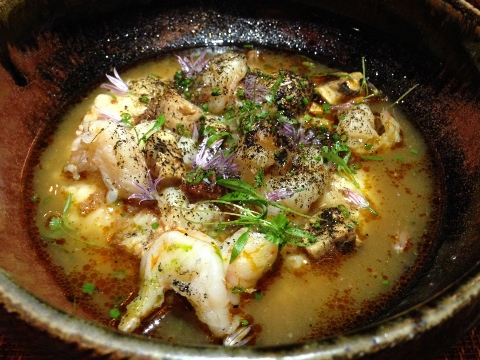 The Ember Grilled Beef Short Ribs with Roasted Beets, Sorghum and Oyster Mushrooms had very nice flavor, but the meat was overcooked and quite tough.  I did appreciate the sorghum glaze on the meat with a fresh bite of beets, a great combination.

For our entree, we split the Sunburst Trout with Cucumber Salad and Green Garlic Potato Puree.  The trout here is so fresh and pink, not like the stuff you find in most grocery stores.  I enjoyed the potato puree with fresh greens on top as well. 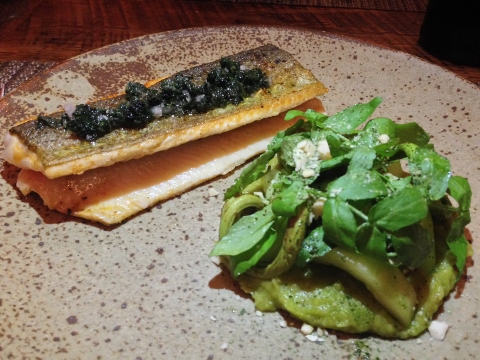 Nashville is such a hot spot for country music, but I think the food is just as hot.  This is definitely a place you need to visit often just to keep up with the rising chefs. 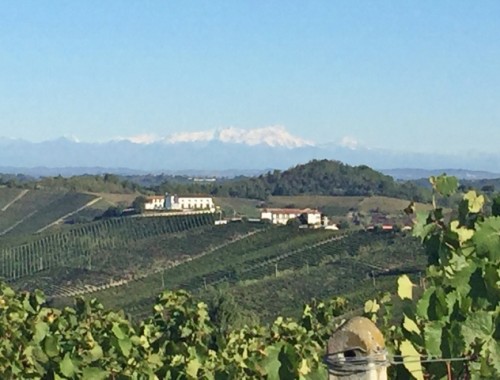 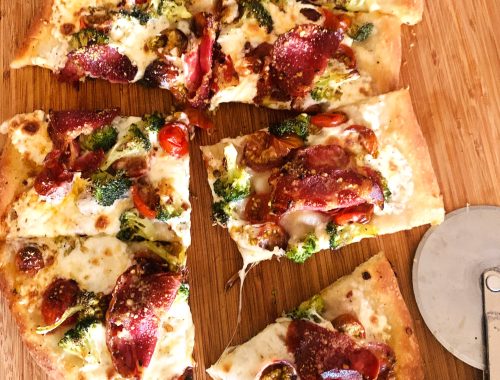 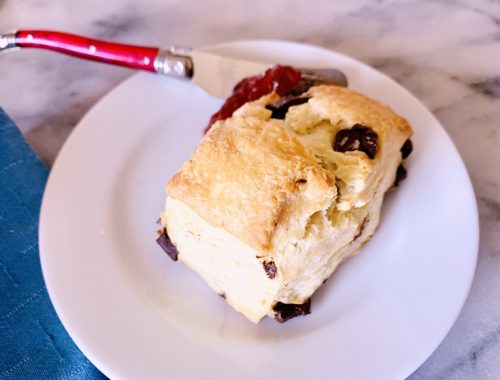