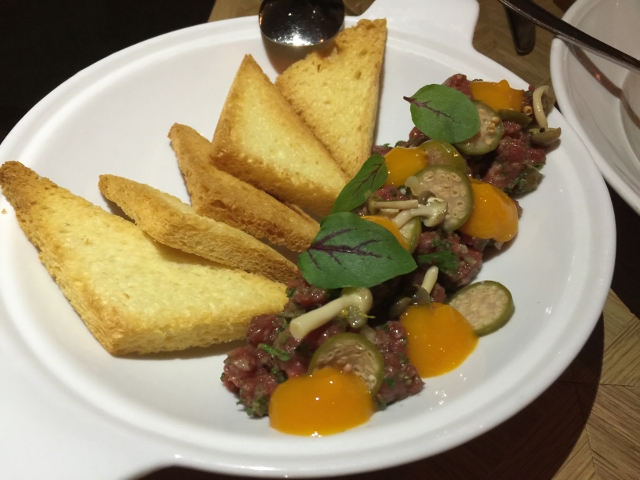 Chef Michael Hung, formerly of Faith & Flower in downtown Los Angeles, has just opened a new restaurant, Viviane, in the Avalon Hotel in Beverly Hills.  This is not your typical hotel restaurant, Chef Hung has created a flavorful continental with French accents menu that will leave you wanting more.

The restaurant is chic in nature with clean finishings throughout.  The outside seating is around the hotel pool with trendy twenty-somethings looking for a fun, but tasty night out.  The bar is equipped with liquor to impress the most finicky of palates and a nice wine list to match. 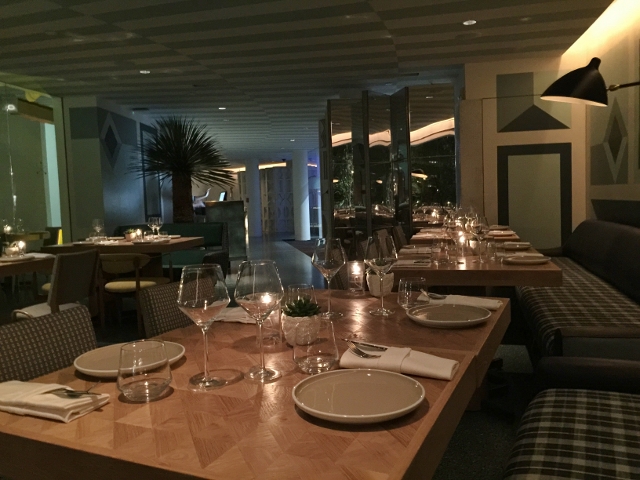 To start we sipped on the Manhattan Flight which included a traditional Rye Manhattan, a Rob Roy – made with Scotch and Carpano and a Cuban Manhattan with 8-year Bacardi Rum and Hamilton Guyana Rum.  The flight was a fun way to start, especially for those looking to explore some unique drink combinations. 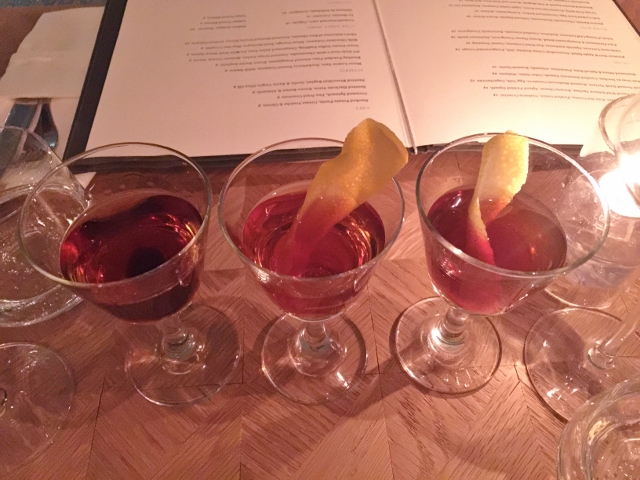 The menu had an overall shared plates theme, starting with the Raw section.  There was a choice of two different tartars – a Tuna and a Beef, a Pastrami-Style Salmon Tartine (which I thought looked interesting) and a Foie Gras Torchon.  The Beef Tartar was amazing!  The large chunks of raw steak were tossed with a mushroom duxelle, raw egg and caperberries.  I found the flavors to be perky and not bland and I loved the texture and creativity.

The Salads were seasonal, especially the Persimmon and Pomegranate with Arugula, Frisee and Toasted Sunflower Seeds.  I enjoyed the Honey Thyme Vinaigrette which added a nice balance with the fresh fruits in the salad. 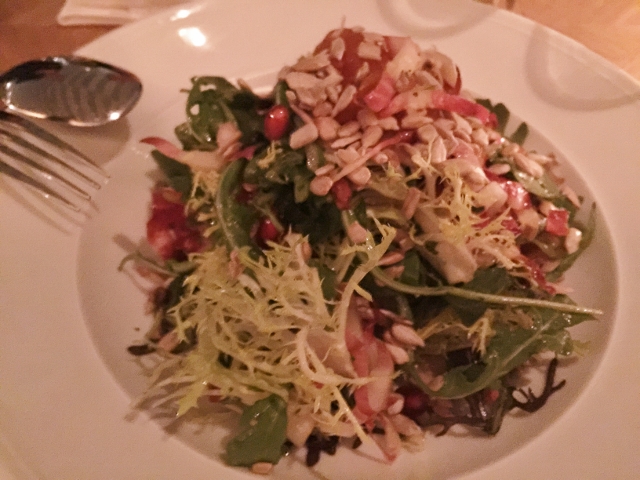 The Bigger Plates had a smattering of pastas, pork belly, tofu ragout and quinoa with duck egg.  The Ricotta Ravioli with Chanterelles and Delicata Squash in a Brown Butter Sauce was lovely.  The only problem was that the sequence of dishes was a little off and we received the pasta after our steak arrived?!  I will however, cut them a little slack considering they have been open for only 2 weeks, but maybe that was the chefs intent to deliver the plates in any order? 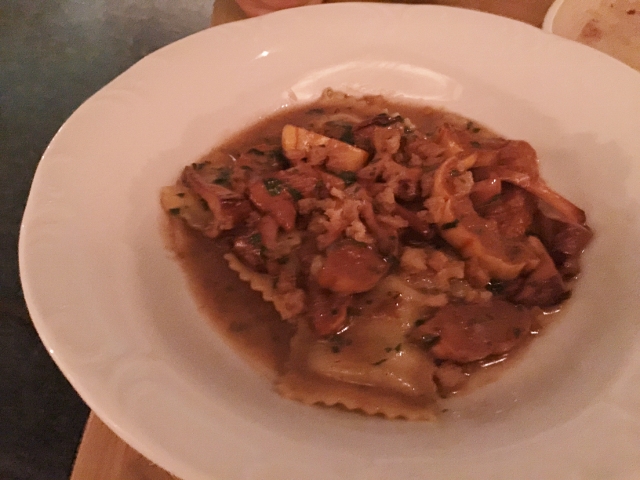 Our final dishes were a Rib Eye with Bone Marrow Gremolata and sides of a Smoky Potato Puree and Creamed Spinach.  The steak was served with a Red Wine Reduction and had a nice flavorful crust.  As for the sides, the potatoes were the best I have ever had with a hint of smoke and the creamiest of textures.  The Spinach was nicely prepared too and I enjoyed the crunch of the mini croutons on top. 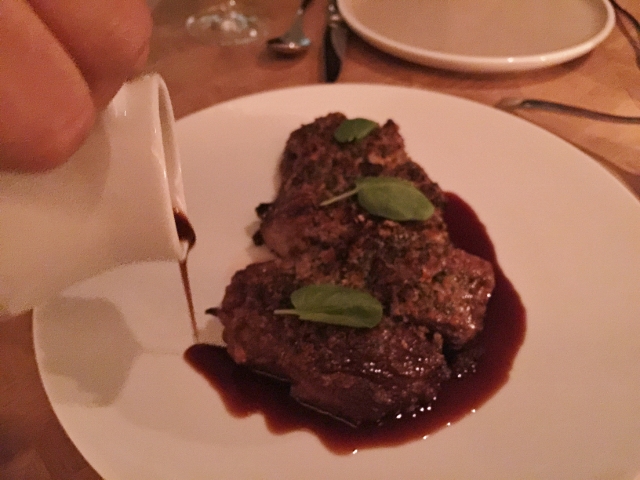 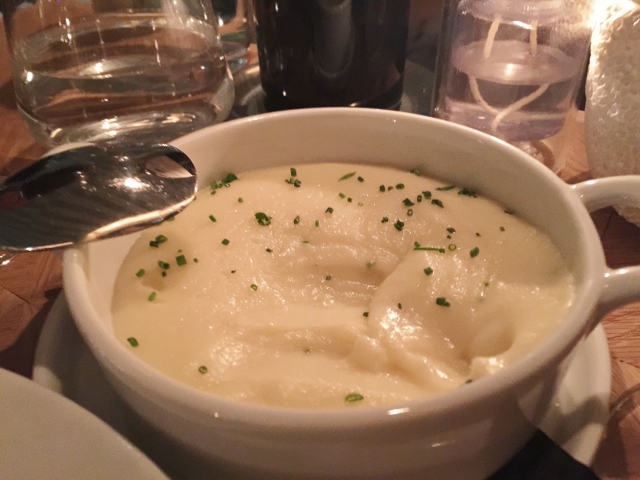 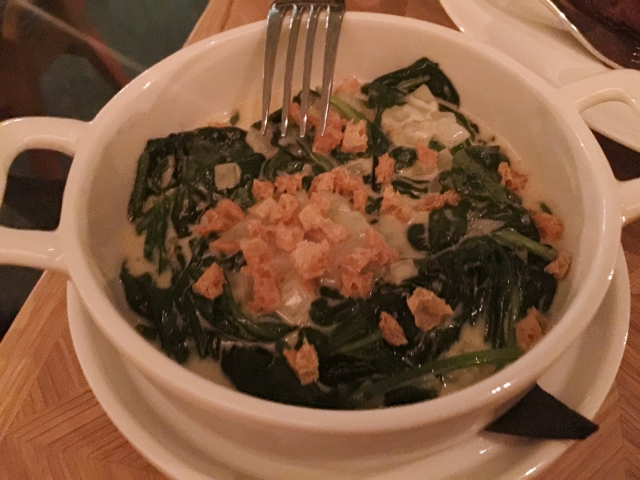 Viviane’s serves many other Large Plates including a Pan Roasted Skate Wing, Half Chicken & Dumplings and Seafood Boudin Blanc Sausage with Lobster and Scallops.  If you never made it downtown to Faith & Flower, now is your chance to taste Chef Hung’s cooking at Viviane in Beverly Hills, it’s delicious! 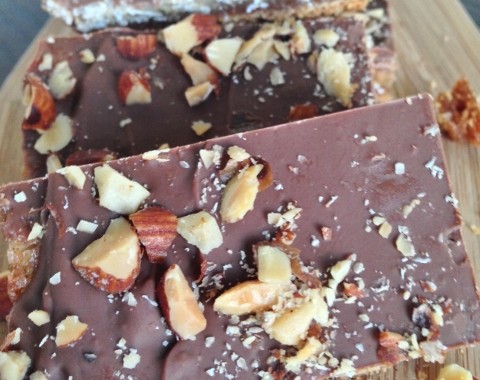 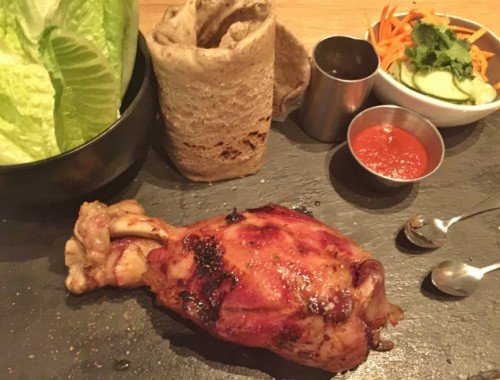 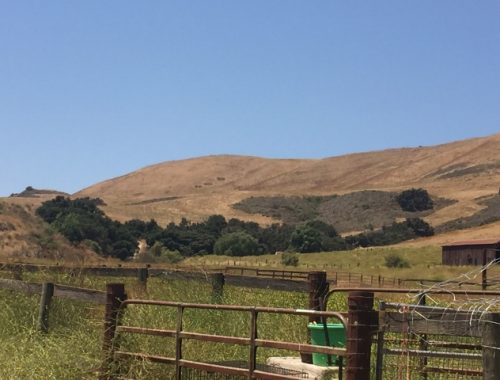