Ireland, in many American’s minds is associated with pubs, music and castles but, Ireland is so much more.  The history and culture is a nice cross between Britain and Gaelic influences which is reflected in their food and customs.  While traveling around the country we met many friendly individuals from other countries that have made Ireland their home and you can witness some of their influences on the cuisine of the country as well.

Upon landing, we headed to our hotel, The Westin Dublin, to unpack and get a quick shower before lunch at Brasserie Sixty6 in Dublin.  After an overnighter in the plane we needed a little nourishment.  For starters, the Raw Vegetable Salad with arugula, beets and raw carrots and crispy toasts with a zesty dressing, cleansed our palates. The Rotisserie items on the menu are the most popular here so, we went with the Roasted Chicken with Herbed Mashies, Peas and Favas and Skewered Stuffing. The chicken was juicy and tender and the stuffing…on a stick, then fried until crisp…very interesting.  It reminded me of thanksgiving. 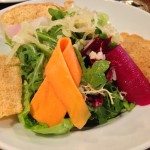 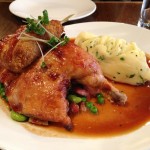 That evening we headed to the famous “Temple Bar” area of the city.  The streets were packed with eager travelers, such as ourselves, to take in a little traditional Irish Music and a pint.  Our taxis driver told us to start at Oliver St. John Gogarty’s for great live Irish music so we did.  The Dubliners were playing upstairs that evening. We ordered a Guinness and Smithwicks and found two stools to take in the surroundings.  The crowd seemed mostly filled with tourists from all over the globe enjoying themselves in Irish traditions. 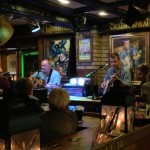 We headed to Exchequer for some dinner which is located just a few blocks from Temple Bar.  Exchequer is a modern Gastro pub which serves quality food from a top chef with a lively bar scene.  The Ledger of Liquor is a booklet they have on each table that reads like a playbook of cocktails, whiskeys and other beverages they serve.

The Cockles and Clams with chunks of chorizo resting in a warm broth for dipping brown bread was fresh and fabulous.  The Fish & Chips were a must after we traveled so far and had heard Ireland’s are the best. Chef Lee Doyle definitely didn’t disappoint with the crunchy exterior of the moist fish, pea mash with bright flavors and thick cut fries. 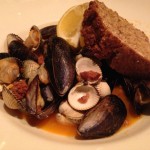 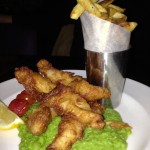 The following day we toured the Dublin Castle which is rich in history and is still used for government meetings today.  Looking for a quick bite that wouldn’t ruin our appetites for dinner we went to the Dublin Farmer’s Market which was mostly food vendors selling prepared foods.  We sampled a veggie quiche with a thick slice of goat cheese on top and a bacon and egg crepe from two different stalls. 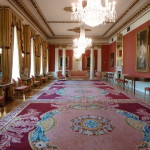 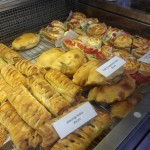 For dinner, Chapter One, considered the best restaurant in Dublin, was our destination.  We were escorted to the bar upon arrival to sip on a cocktail or Irish Whiskey in our case, while we ordered dinner from the menu.  It is tradition in Ireland, in high end restaurants, to order your dinner before they take you to your table so your food arrives promptly. 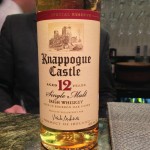 Chapter One creates an atmosphere with “old school” service and upscale traditional Irish cooking.  I began with Creamed Tapioca with ewe’s milk cheese, spinach and black truffle syrup.  The savory pudding was creamy with a little tang from the cheese and the black syrup added a nice earthy touch.  The Burnt Onion Broth with smoked potato and buttermilk had mild smoky flavor but. was a little bland. 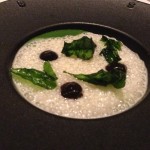 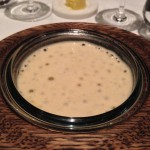 Next, The Pigs Tail stuffed with smoked bacon, langoustine farce (stuffing) in a citrus mustard fruit glaze was extremely rich in flavor and shredded like pulled pork when cut.  The Quail glazed with truffle honey and Irish sweetcorn with pickled girolles (mushroom) was mild and cooked nicely. 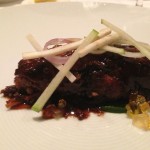 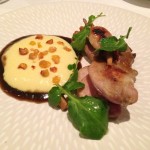 The Poached Breast of Guinea Fowl with cooked bacon, savoy cabbage and braised white beans was prepared two ways – as a roulade and a loin.  This most traditional Irish dish was great in flavor and presentation but, the Achill Island Black Face Lamb with fried sweetbreads and acidulated onions with caper flower lamb sauce was very decadent but, lacked panache. 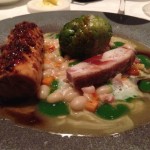 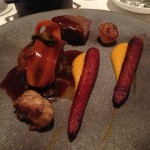 The best plate of the night by far was the dessert – Manjari Chocolate with sour milk cream, caramel biscuits, malted barley ice cream and meringue with chocolate crumb.  The presentation was fantastic and the flavors melted in your mouth.  I loved the textures of the chocolate and cream with the meringue.  It looked like a deconstructed meringue cake and tasted much better.  The cheese plate was a nice mix of local Irish cheeses but, I was too full to give it justice. 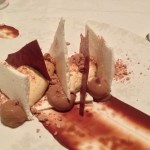 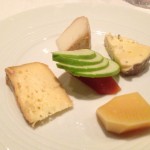 The following day we were off to Trinity College, Ireland’s most famous school, to see the book the Kell’s and the library.  The college tour is given by a current student of the college and is very entertaining.  The tour ends at the steps of the library where the book of Kell’s, written on vellum or calf skin, illustrates the books of Matthew, Mark, Luke and John.  The library is by far the most impressive I have seen.  It looks like a picture out of Harry Potter.  Impressive! 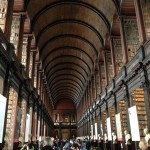 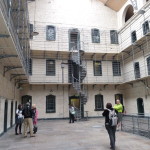 Next, the Kilmainham Gaol (Jail), where British housed and executed political persons in the uprising of the early 1900’s was both powerful and rich in Irish history. Needing a little nourishment after a day of seeing sights, we headed for coffee at KC Peaches, a local coffee cafe in Dublin.  I had a meringue flecked with pistachios and a cappuccino dusted with cocoa powder.  Delightful. 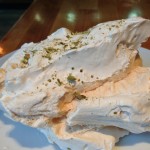 That night we headed to Locks Brasserie in Dublin near the canal for dinner.  Chef Keelan Higgs is creating some of the best cuisine in Dublin.  The first thing I noticed was the canvas bread basket serving fresh ciabatta and baguette with Irish butter. The breads were freshly baked and of course the butter was local. 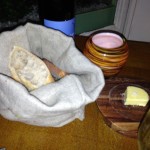 For starters, Raw Oysters with Vietnamese Dressing, Diced Cucumber and Crispy Shallot were some of the best. The creaminess of the oyster with the tart vinaigrette and crunch of the shallot was a delight my the mouth. 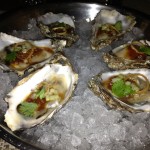 Loin of Rabbit with black bacon and sweetcorn with crispy polenta and mushrooms was comforting without being heavy.  The rabbit was rolled roulade style and sliced thin and served with a delicate raisin jus which was savory and not too sweet. Lovely. 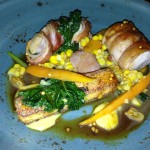 The Iberico Ham Carbonara was served ravioli style with each pasta layered individually.  This unique version had all the flavors of a traditional carbonara but, used a raw duck egg and girolles for richness.  The slow roasted Lamb Cassoulet with cripsy shoulder in a onion consomme was earthy and comforting.  The beans added creaminess and the braised artichokes were a nice surprise. 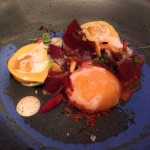 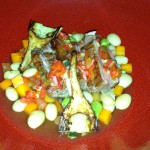 The next day we visited the National Museum of Archaeology which contains Irish treasures from the stone age to today.  We stopped in at O’ Donoghue’s for some more Irish music, a pint and a toastie.  Red lights lit the place which makes it hard for a photo.  It was great fun! 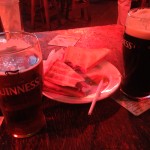 The following day we picked up our rental car and headed north towards Belfast but, first stopped at Newgrange.  Newgrange is a burial site which dates back to 3200 B.C. and holds a 20 ft. stone igloo style dome which was used as a grave.  Bring a wind proof jacket because it gets chilly waiting for your turn inside the dome.   Now off to Northern Ireland. 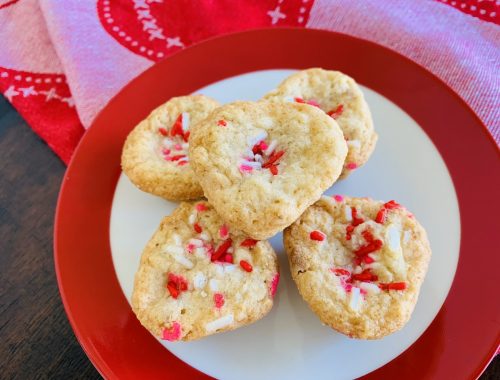 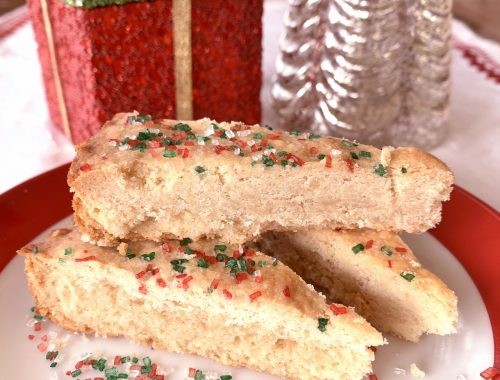 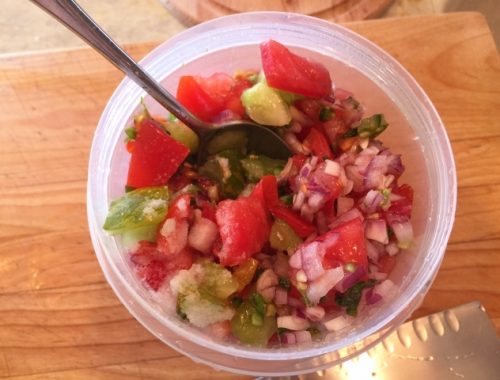